Remove Malware, Trojans, and dialers from your PC. 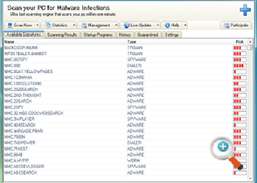 You can scan your PC with EMCO Malware Destroyer fairly easily, and the tool is offered free of charge. But you'll need to contend with a somewhat muddled interface and a lack of direction within the software.

Quick scans:In less than a minute, EMCO Malware Destroyer completed a scan of our PC. It didn't turn up any issues, though, so we weren't able to test the Remove Detected Threats option.

Odd layout:The interface is a bit of a mess, with tabs used when buttons would suffice (and vice versa) and font choices that make labels sometimes hard to read. It's arranged in tabs, starting with Scanning Management, and the biggest button is labeled Scan Wizard. There're only two choices, though -- your PC or a remote PC -- so it's not much of a wizard, since the scan starts as soon as you select one of those options. The good thing is that it's fairly easy to initiate a scan, but with no in-program Help file, it takes some playing around to figure out what's in each tab.

Protect your kids from getting to adult sites while surfing the Net.

Surf the Internet without revealing your IP address.

Protect your Internet privacy by cleaning up all the tracks of Internet and computer activities.