See if you can beat the computer in a game of dominoes. 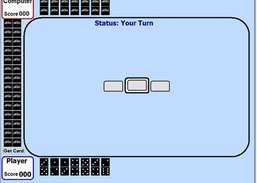 We have to admit that as kids we spent more time setting up dominoes and knocking them down than actually playing games with them, but the real game can actually be a lot of fun. An electronic version of dominoes seems as if it would be a nice complement to other computerized pastimes like solitaire and Sudoku, but, unfortunately, Dominoes Game does not deliver.

The first problem we ran into with this program was that we didn't entirely remember how to play dominoes, and Dominoes Game has no help file or other guidance. We found a quick online refresher and then set about playing against the computer. The interface is plain, with a playing space in the middle, the computer's tiles across the top, the human player's tiles across the bottom, and the draw pile down the left side. The program has a drag-and-drop design, but we frequently had trouble getting it to select a tile when we clicked on it, and sometimes we had to drag tiles two or three times before they would drop where we wanted them. It also seemed that sometimes we would drag and drop tiles and they would simply disappear into thin air. We were starting to get annoyed with Dominoes Game; then we realized it was actually completely unplayable. When it was time for the computer to select a tile from the draw pile, a dialog box stating "Computer Will Take Extra Card" popped up. No matter how many times we clicked OK, the message kept popping back up, and there was no way to get rid of it aside from forcibly quitting the program. We restarted the game several times, but this same error kept occurring, making it impossible to finish a game.

Sharpen your skills at Bridge with this fun and easy-to-use game for Windows.

Concentrate while matching tiles to clear the board.

Leap from daring heights and avoid deadly robots in this free 2D platformer with 500+ levels.

Play chess against your computer.

Defend the military base until help arrives.