Image Thumbnailer and Converter About 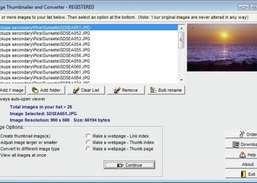 This program makes resizing, renaming, and converting images a hassle-free affair. Image Thumbnailer and Converter's nonresizable interface certainly isn't beautiful, but it is blissfully easy to understand, allowing you to queue up single files or folders full of images (the demo limits you to five shots at a time). You then check boxes depending on what kind of task you want to perform. Though you'll see separate options for resizing and generating thumbnails, both lead to the same screen, which allows you to determine the size of output files either by using a slider or entering precise dimensions. You also can convert shots among popular formats including TIFF, BMP, and JPEG; if you choose the latter, you'll be able to apply compression. You won't find any editing tools to speak of, but the application offers a batch-renaming feature. Image Thumbnailer and Converter also can build basic, Web-ready thumbnail galleries, though you have little control over the appearance of the finished page. All told, this program seems like a solid choice, provided you already have an image editor.

Organize and edit your photos and videos with batch enhancement, panorama, HDR and RAW conversion.

Create your own photo cards rom a variety of professional templates in a minute.