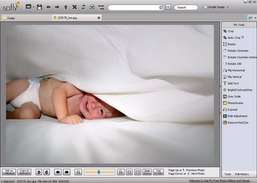 Fly Free Photo Editing & Viewer offers several standard image-altering functions and a few helpful surprises. While it's mostly nothing new, Fly Free proves a solid enough performer to make it a good alternative to costlier choices, especially since it's free.

The program's interface feels very natural to operate. Its professional-looking design is a big part of its efficient, intuitive nature. Fly Free's functions felt familiar because we'd seen them in many similar photo and image editing programs. Within the interface's sleek design lies some expanded functionality. For instance, we were able to change the hue of our image, remove redeye, turn color images into grayscale, control brightness, crop the shot, and more. It also offers a slideshow feature. All Fly Free's controls worked well but felt more or less generic since the program doesn't offer much in the way of basic functionality that its competitors don't. Where Fly Free showcases some ingenuity is with its special features, such as a push-button option for uploading photos to Facebook, Flickr, and Google, which we'd never seen before in an image editor. We felt it would be a great tool for frequent users of those and similar Web sites.

Organize and edit your photos and videos with batch enhancement, panorama, HDR and RAW conversion.

Apply artistic effects and frames to your photos.