Use visual countdown timer for presentations or personal timing. 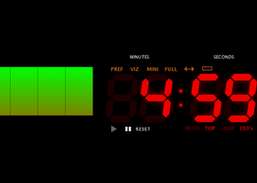 Bling Clock helps users keep track of time with simple commands and functions. This program is simple and effective enough that users of all skill levels will enjoy it.

The program's interface is sort of rough and will take some getting used to. Most options fade to black when the mouse isn't over them, which we found slightly annoying. However, when we could see things, the program was very intuitive and didn't require a trip to the Help file. The clock consists of a large black clockface and giant red digital numbers. Users can choose to run a stopwatch or a countdown that can be set to their liking. The program does not tell time, but we didn't mind since most computers already perform that function. The stopwatch also features a green bar that shrinks as the time counts down. It's a great visual but doesn't seem to add anything to the overall function. The program is also home to some helpful features that allow users to customize the clock. Users can change colors with the push of a button, as well as change the alarm sound and many other options just as simply.

Stick your notes on the desktop and read important information at any time on the screen.