EMCO UnLock IT About

Unlock file or folder locked by system processes or applications. 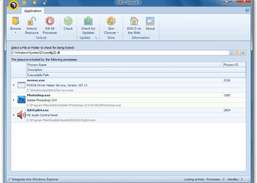 Two questions: 1) Have you ever tried to delete or rename a file or folder, only to have your own PC tell you no, you can't do that because it's locked by another program or process? 2) Don't you have enough frustration in your life without software piling on? EMCO UnLock IT takes care of Question 2 by dealing with Question 1. It's freeware that can unlock files and folders that are locked by system processes or other programs when you receive an Access Denied error message. It does this by attempting to close any processes and services locking a resource or, if that doesn't work, prompting the user to terminate the process holding the resource hostage. That's handy if you're not sure where the file system fender-bender happened, but EMCO UnLock IT can save time by unlocking resources more quickly than you can do by the usual step-intensive methods. It can also terminate viruses, Trojans, and other hard-to-kill malware.

Test components of your PC for endurance and reliability.

Split your large files and create a self-uniting executable file.

Find and remove unwanted files from your windows PC.