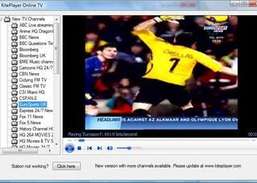 KitePlayer Online TV is a streaming video player that features content from around the world. Although all of the program's content is available elsewhere online, we like the fact that it puts such a wide range of entertainment all in one place.

The program's interface is sleek, with a large display pane in the middle and links to the content arranged in categories down the side. There are 20 different categories, such as sports, news, entertainment, and TV shows, and each one contains plenty of channels from around the world. The sources vary; some TV shows, for example, are from Hulu, while there are also live streams from actual television stations. Much of the content comes from Justin.tv, and these channels didn't always work, but there were plenty that did. KitePlayer states that it removes nonfunctional links as they are reported, and on the whole we found the player to contain better content than similar programs we've seen. We found ourselves somewhat mesmerized by the ability to switch between a man chanting in Iran to a Japanese newscast to Russian disco to the weather in Philadelphia. We found a channel showing nothing but Westerns, an episode of Bugs Bunny, and student-produced movies. The content is diverse, and not all of it is great, but it is great fun to explore. The program is easy to use--users simply click on the channel they want to watch--but there's no Help file. A nice extra feature is the ability for users to post what they're watching to Twitter, Facebook, or MySpace.

Watch TV channels and listen to radio stations on your PC.