Convert audio and video files from one format to another one. 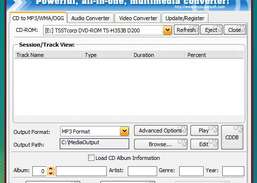 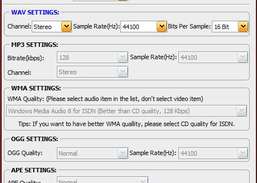 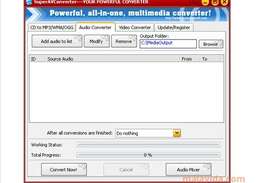 We've reviewed a lot of media converters, and our biggest beef with most of them is that they're designed to do only a few types of conversions. Every now and then we come across a program that's a little more full-featured, but rarely do we see a program like SuperAVConverter. This comprehensive program converts both audio and video files to a wide variety of other formats, and may well be the only media converter you'll ever need.

The program's interface is slightly cluttered in places, but it's fairly easy to navigate. The three major features--a CD converter, audio converter, and video converter--are arranged in easy-to-access to tabs. The CD converter allows users to rip tracks from CDs and save them directly as MP3, WAV, WMA, or OGG files without an extra conversion step. The audio converter allows users to convert existing digital files between popular formats including MP3, WMA, AAC, and more. The video converter allows users not only to convert video files between a wide variety of formats, but also to strip audio tracks from video files. Our major complaint about SuperAVConverter is that it doesn't seem to have a Help file, which is a necessity for a program with this many features. Still, the program's basics are easy to figure out, and overall we were impressed with its capabilities.

Convert video and audio files for playback on multimedia devices.

Convert your video and audio files between all popular formats.