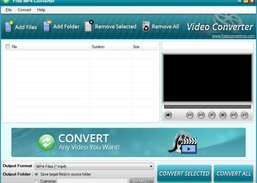 A Free MP4 Converter is extremely necessary for professionals. Though MP4 is one of the most popular formats, there may arise a need for users to have files in other formats. This tool changes MP4 files to several other formats such as AVI, APEG, WMV, MOV and 3GP, to name a few. Therefore, it is a comprehensive converter that can take care of most of the requirements of users across the world. The application is a standalone one that does not require internet connectivity to get the process completed. The fact that the conversion can be done in a few minutes is yet another attraction. This tool comes for free unlike most of the other ones. Its download and installation does not pose any issues as it is clean from malware and adware. If users come across any junk wares, they can be easily de-selected during the process of installation. The Free MP4 Converter has many benefits which can be put to use by its users. This is a very friendly application. All the features are easily laid out on the interface so that users do not have any issues locating the same. There are many options in the form of drop-down lists which makes its operation easier. Its functionality is so basic that even an inexperienced user can use it without a hitch. In addition to the above, the quality of the files after conversion remains intact, if not better. Notwithstanding the resultant file type, users can modify video and audio parameters with just a few clicks on the Free MP4 Converter. It is indeed a very handy tool and can make anyone's job much easier. Being a light weight app, it does not interfere with the performance of the system in any way. So, it is worth considering.

Convert MTS videos to MP4 ones with high quality maintenance.