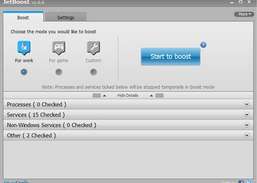 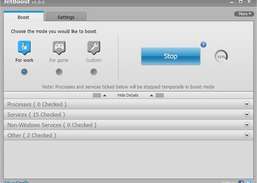 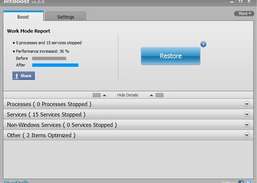 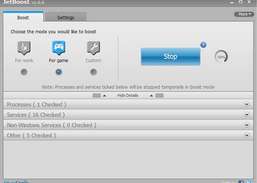 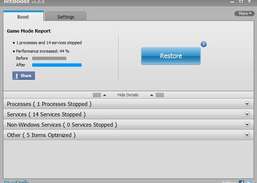 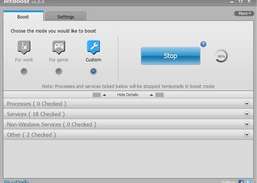 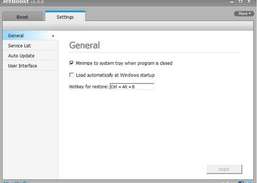 Remember how fast your brand-new PC felt? And how quickly it seemed to slow down to "same old"? While hardware keeps advancing, some of the lost zip might be because of resource-hogging processes running in the background, such as update checkers and Windows services you don't need. JetBoost is a free system utility that scans your PC for stuff that can slow you down and shows you where and what it is so that you can decide what to stop.

JetBoost offers three boost modes: Work, Games, and Custom, with specific groups of processes and services to stop for each. It automatically scanned our system the first time we ran it. The simple but clear interface displayed the scan's results in the Boost tab, grouped together by category: Processes, Services, Non-Windows Processes, and Others. Each category displayed the number of processes selected for review; expanding a heading displayed more-detailed results. The scan turned up results for our system in both Services and Other. We reviewed the program's suggested Services, some of which could be stopped with no problems, such as Themes. Others, such as the Portable Device Enumerator Service, could be stopped for some circumstances but might cause problems in others, such as using an external backup or media drive. Under Other we found options such as Clean RAM and Enable game power solution, which changes your system's power management settings to high performance (the default is usually "balanced"). When we'd made our selections, we clicked Start to Boost. A Before-and-After graph claimed our system's performance had been increased by 22 percent. Frankly, we're a bit skeptical of that claim. But nothing bad happened, and we could click Restore to undo the changes. The program's settings included the ability to edit the Service List for custom scans, set the transparency, and other basic housekeeping.

Speed up your PC by cleaning up junk files and optimizing settings.

Check if your PC is able to run Windows 7.