Optimize, tweak, fix, and clean up your Windows 7. 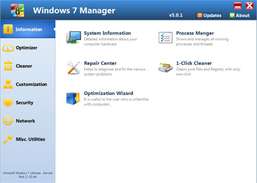 Windows 7 Manager is an all-in-one system cleaner, tweaker, and maintenance tool that, among other capabilities, incorporates a wide range of "fixes," many of them built into Windows, yet tucked away in odd corners that make them difficult for ordinary users to access. That's sometimes because inexperienced users who misuse a fix or a tweak can cause more problems than they started with. Windows 7 Manager is a good example: It probably packs more features than any tool of its type we've seen thus far. Yet with so many things to run, inexperienced users can end up "fixing" their systems for good. Used carefully and regularly, though, Windows 7 Manager has much to recommend it. It's shareware that's free to try for 15 days.

Open and decompress any RAR archive.

Analyze your system and view your hardware information.

Update your device drivers and boost system and gaming performance with one click.

Clean the temporary files from your hard disk.