Clean, optimize, and free up your computer's memory. 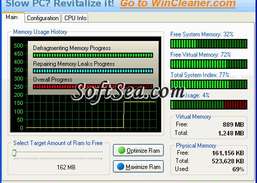 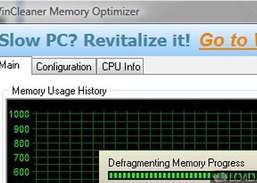 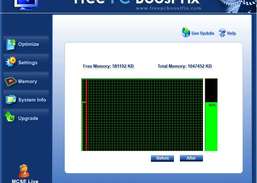 This free memory optimization utility certainly has a nicer memory graph than XP's Task Manager, but we noticed no long-term improvement using its key functions.

WinCleaner Memory Optimizer's interface is fairly straightforward, with graphs to display your computer's RAM and CPU usage in real-time, and buttons to implement optimization options. You can manually free memory by clicking the Optimize RAM button, which is supposed to release extra memory on the fly. That's the theory, but we noticed a mere spike in page file and CPU usage, then a return to the same free memory level. The Maximize RAM feature forces your PC to release memory where possible. Again, we found a large spike in CPU and Page File usage and received only a few KBs of added memory in return.

Clean your memory with one click or automate memory cleaning.

Monitor your system's memory condition and optymize it.

Free up your PC's memory locked by executed applications.

Monitor and free up your memory when it falls below a certain minimum.