Auto Clicker by Shocker About

Configure your mouse to autoclick. 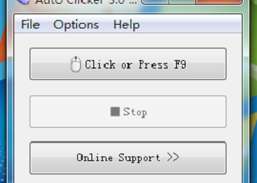 The first auto clicker appeared not long after the first mouse, and since then they've evolved alongside mice. Some auto clickers have stayed simple, though. Like primitive but successful organisms that have found their niche, the most basic form of auto clicker lives on, emulating mouse clicks on demand. Auto Clicker by Shocker is as good a specimen as any. This simple freeware can simulate single or double clicks by your left, middle, or right mouse buttons at intervals you select, including pauses, freezing the cursor, and stopping automatically after a predetermined number of clicks. You can also set a hot key to stop the clicks on demand.

Record scripts and automate mouse clicking to speed up the execution of repetitive tasks.

Measure the real DPI of your mouse, and calculate the sensor accuracy.