Scan your PC for license keys for many different software. 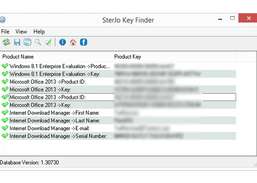 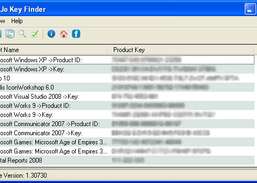 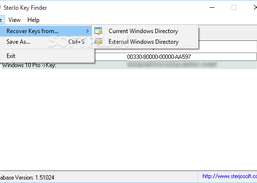 ,p> SterJo Key Finder is a free program for Windows that scans your PC for license keys for many different software programs including (but not limited to) Microsoft Windows (Windows 7, Windows 8 or Windows 10 product key and the old Windows XP), Microsoft Office product key (Office 2010 product key, Office 2013 key), Microsoft Visual Studio, ACDSee, AutoCAD, Corel Draw and many more. And it's pretty simple - all you have to do is download it, extract it to a folder and run it from there. It will soon detect all the software license keys on your computer and display them to you in a list format. You'll find it pretty useful. It's main advantages are that it can display product keys for various software. It detects your installed programs automatically and it lists them immediately. The software can be installed swiftly, it does not require too many resources and it is free. Also, it can be used to detect the license keys not only from the computer on which it is running but also from a dead unbootable computer. What you can do is take out the hard disk of non-booting computer, attach it to a working computer as a secondary hard disk, boot into working Windows and then run SterJo Key Finder. It will find the product keys for your installed applications immediately, saving you from unpleasant situations.

Encrypt and protect data with password on your removable pen drive.

Make your drives and folders read only.