Monitor all available devices compatible with the UPnP protocol over your network. 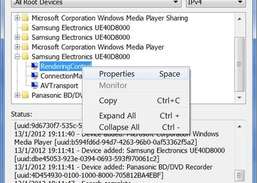 The Universal Plug and Play (UPnP) protocol is an improvement over the earlier "plug-and-pray" standard, which is a different technology. Devices that use UPnP announce their presence when they're attached to a network, which makes them easier to install and integrate, especially in a large environment. UPnP is a work in progress, however, and there are unresolved issues, particularly with authentication. Noel Danjou's Universal Plug and Play Tester is a free utility that lists all UPnP-compatible network devices, including Internet Gateway Devices.

This utility downloads as a small compressed file, even though it includes both 32-bit and 64-bit versions. The program is accessible immediately after extraction, without requiring a formal installation process. This makes it completely portable, so you can install it on a USB drive and use it on any PC. It's automatic, listing all UPnP-compatible devices on our test machine as soon as we opened it. The interface resembles a properties dialog, displaying a tree view of devices above a status report pane. We like the utter simplicity of its four controls: one for selecting which of 14 device types to monitor, another to disable Universal Plug and Play Tester, a Save button for saving test results as text files, and an About button that includes a link to the program's online forum for further help.

Find out what's on your network today with the new Slitheris Network Discovery.

Install Acrobat Reader to remote computers instantly from a workstation.