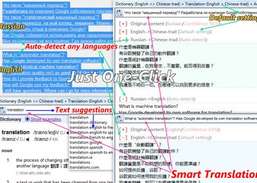 Dictionary .NET is a small program that uses Google's dictionary and translation services. It's not very intuitive, but once you get it figured out, it's a handy tool to have around.

The program's interface is mysterious, with an empty space where you're supposed to enter your search term, and a larger empty box where we figured the search results would appear. We tried searching for some words in English, and English definitions came back. That was all well and good, but we thought that the point of the program was to translate between languages, not just give us English definitions. We clicked around a bit, starting with the question mark on the interface, which we assumed would lead us to the Help file. But there was no Help file. The Options menu did contain a long list of languages with check boxes next to them, but we weren't sure what that meant in the context of the program. Finally, quite by accident, we stumbled upon the answer; a well-disguised button on the interface that opens a list of languages between which users can translate. We tried several languages and were able to easily translate back and forth. Users should note that the program really is a dictionary and not a translator; you won't be able to translate blocks of texts with it. But as a dictionary it works fine, once you figure it out.

Create and use your own dictionary.

Translate documents from English to Spanish or vice-versa with this wizard.

Search for the words and translate sentences into different languages.