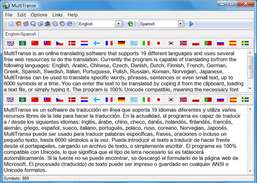 MultiTranse is a simple utility for translating languages. The program impressed us with its speed and accuracy, but it left us wanting just a little more than it provided.

The program's interface was a delight. Not only was the layout intuitive, with its smartly designed command icons, but also it's helpful. A pop-up tip screen walked us through our first translation, completely eliminating any need to seek instruction from the Help file. You simply enter a primary phrase in any of the 24 languages MultiTranse handles--we chose English--and select one of the national flags representing the language you want your words translated into, in much the same fashion as many multilingual Web sites. We only have a basic knowledge of French and Spanish, but we were happy to see our translations accurately converted into those languages in a few seconds. Since we don't know any of the other languages--including Korean, Russian, and many others--we can only hope the program is equally as accurate with those translations. We were disappointed that the program didn't offer any special features, such as an audio pronunciation component. Regardless, this program performed its translations well, and we felt users of any level would be confident with its results.

Translate any word or words on screen as you move your mouse cursor.

Study and learn French vocabulary with a quiz program based on a popular TV show.

Type and edit text in Japanese characters on western versions of Windows.