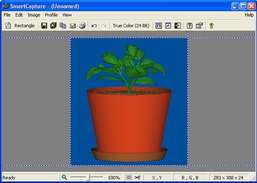 Windows comes with its own screen-capture feature, but there's not much to it, and anyone who uses screen captures more than occasionally will quickly realize that they need a more robust tool for this task. Fortunately, there's SmartCapture. This simple program lets users customize their screen-capture experience, both before and after the capture is taken.

SmartCapture isn't the most intuitive program at first glance, but it didn't take us long to figure it out. The program's interface is plain, with its major features arranged in menus and buttons. SmartCapture allows users to create different "profiles," making it possible to create highly customized image captures. It comes with three profiles--rectangle, screen, and window--and to take a screen capture, users simply select the appropriate profile and click the New button. The program then captures the selected area. Custom profiles allow users to specify the image source, capture area, caption options, and more. SmartCapture also includes a wide range of image-editing tools, allowing users to adjust colors, brightness, and contrast, as well as flip, rotate, and invert images. SmartCapture comes with a detailed Help file, which if anything is a little too wordy. Overall, we were impressed with how easy SmartCapture is to use and how many features it contains, and we think it's a great choice for users who need to take frequent screen captures.

Take a snapshot of anything on your computer screen.

Capture screenshots and save them to various image formats.

Convert your images into JPEG format.