Reduce the size of your images. 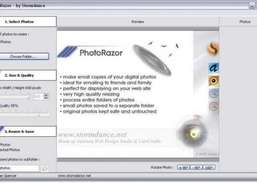 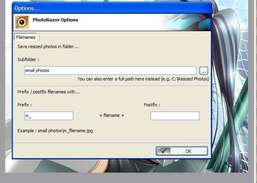 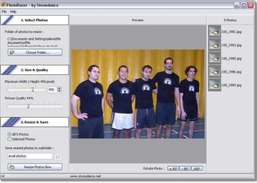 PhotoRazor provides users with a fast and efficient way of shrinking photos without diluting quality. With only a few commands and impressive results, this will be an asset for frequent photo editors.

The program's interface is an intuitive affair that most will feel instantly comfortable with. By only offering a few well-placed command icons, users will understand almost immediately how the program works. A useful Help file is available. The program begins by users selecting a folder they'd like to convert. Each of the photos is listed along the right side, with one featured in the center of the screen. Along the left side, users are able to customize their shots with two sliders that pick the new photo's size and its picture quality. Users choose a radio button to convert just the photo on screen or the entire folder. They then hit the Convert button and their snapshots are shrunk in a matter of seconds. We were pleased with the results and felt that the smaller images were just as crisp and clear as the larger ones. The program's features include the ability to rotate the photo with a single click. Additionally, users can convert their images to black and white just as simply.

Convert, rename, and organize your photos.

Create and alter photos and graphics manually or via scripting.