Inspect, measure, magnify, capture, or overlay grids and lines over images on your desktop. 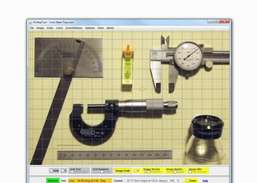 The need to take calibrated measurements of pictures on the desktop was a key motivation for this application. PicMapTool sits over the desktop in your primary monitor area to augment other tools you may be using. Flexible grid or cross hairs or common picture aspect ratio boxes to ease crop choices may be moved over your image viewed through PicMapTool from the desktop below. Calibrated measurements by drawing lines are done by first drawing a line over a coin or by simple entry of how long the last line was such as over a ruler or a scale of miles on a map which allows next lines drawn straight or on a path to be measured. Desktop image capture and rotation/mirror or blending with other images brought up on the desktop allows for watermark, 'bluescreen' effects, or your own outlines to overlay desktop image below. A zoom window allows detailed inspection of a small area in your picture on the desktop below.

Browse your images in a user-friendly interface quickly and easily.