Use the iPad interface on your desktop! 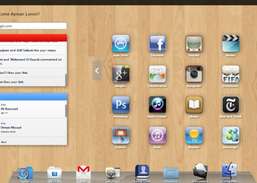 You know those gifts that are just one letter shy of being awesome like getting a Transfirmer, iPone, or a Ybox console from that person who just doesn't get it? This "program" is one of those. It is almost a cool thing but really just a sucky knockoff of something that was a cool thing, making it worse than nothing at all. It doesn't really "do" anything except pretend to do stuff. Like others have said a shortcut for an app will be a link to an app-ish webpage impersonation. The claim that it emulates anything is false. T'were it so I would be able to play an app store app within it and that is not at all possible. Please don't waste your time, and lots of it you will. Both the download and the script itself were painfully slow going. I am actually somewhat surprised to see this on here since dl.com usually maintains such a high level of standards. The only way you can consider this to simulate an iPad is for a person who has no idea what one should be like because they have been detached from technology.
Download (35.14MB)