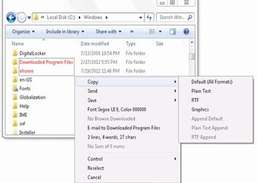 While this program works well as a screen-capturing tool, its abilities are limited when trying to grab graphic elements. Kleptomania is billed as an application that allows you to grab items out of range for a Clipboard, such as file lists or menu buttons. Yet its OCR (optical character recognition) technology does not work as seamlessly as we'd expect. The program failed to recognize many letters in a certain BMP image, even though we had purposefully used large, standard fonts in the image. The interface also is not very user-friendly. During testing we found ourselves editing the program's INI file to customize advanced settings, as there was no other way to do so through the program interface. Some features appear disabled as well, even though this program isn't a free demo version. Overall, while Kleptomania has the capabilities to capture basic screen shots, it will no doubt disappoint users looking for more advanced capturing features.

Monitor the time in different time zones in your Windows system tray or on desktop.

Make your mouse cursor point to the direction its moving.