Do more with Windows on your PC with free programs from Microsoft for photos, movies, instant messaging, email, social networking, and more. 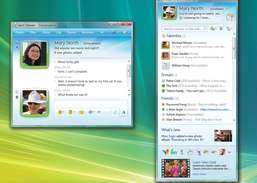 We're big fans of software suites that auto-update without getting in the way, and that let you weed out unwanted applications from its roster without having to get sneaky. Windows Live Essentials does both. The software suite of seven Windows Live applications doesn't shy away from the marketing vehicle it is, and it also detects and updates Microsoft-related items that aren't installed as part of the pack, such as Outlook and Silverlight. Our biggest complaint is its size, which weighs in at 134MB. However, if you've got space to spare and use Windows Live applications such as Messenger, Outlook, and Windows Live Family Safety, this all-in-one bundle will help you keep things current.

Chat with all your Facebook friends directly from your Desktop

Chat and stay in touch with friends and make new ones.