Leawo PowerPoint to Video Pro About 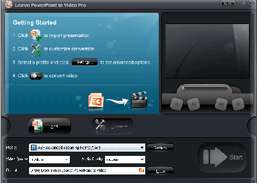 Leawo PowerPoint to Video provides a simple tool for converting slideshows to video. Its professional layout, focused functions and simplicity make this a great choice for those seeking to view their PowerPoint presentations in new ways.

The program's interface instantly impressed us with its professional design and its simple layout. We never felt compelled to seek out Help file instructions, because the entire process felt so intuitive. We were able to build a queue of PowerPoint files for conversion within a few minutes, which was nice but expected. The program's biggest surprise came from the variety of file types we could convert to. Everything was available, from traditional video formats like .avi to the iPod-friendly MP4 format on down to Xbox-compatible files. The conversion took a few minutes, but it didn't feel long considering we were converting a slideshow with over 20 slides. When the conversion was finished, the data and images looked exactly the same in their old and new formats. The program also provided a few features for customization, such as lag time between slides and adding music, which were nice but not deal breakers. Overall, Leawo PowerPoint to Video is a sleek program that performs its job with no troubles, just how we expected.