Batch PPTX to PPT Converter About 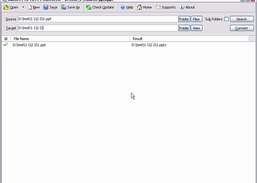 Batch PPTX to PPT Converter offers a simple and fast way to change a PowerPoint's file type. With an impressively simple layout, even novice users will be able to use this program.

The program's interface is so basic we found a few seconds of experimentation to be faster than reading the instructional Help file. With only a few command buttons, even those who've never converted a file before could master this program. We were able to choose a single file, multiple files, or an entire folder to convert. The files were listed on a large screen that showcased the new file type and location once the conversion was complete. We appreciated that the program didn't offer any choices for conversion. PPT files were converted to PPTX and vice versa, with no options to alter those choices. The files went to their assigned destination and the data on each PowerPoint was intact. However, we were disappointed the conversion took over a minute, as we expected it to happen instantly. The program's best special feature, a search engine, helped us track down files we didn't know the locations of. While the conversion was slow, it was not enough to prevent this simple and effective tool from winning us over.

Place bids in the last seconds of eBay auctions.

Replace WordPad with a compact and full-featured word processor.