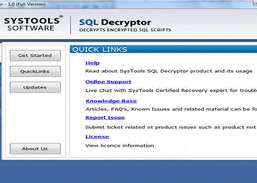 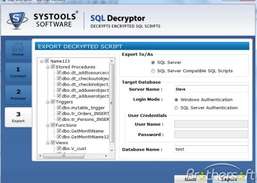 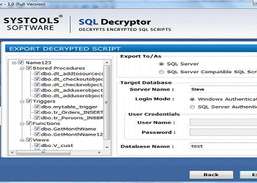 Encryption from SQL databases can be removed using the SQL Decryptor software. The encrypted database files can be uploaded to the tool panel and the original script can be previewed within the interface. After removing the encryption the DB files can be exported to either SQL Server or SQL Server Compatible SQL Scripts. Encryption can be removed from the files by providing the dual login details including Windows authentication and SQL Server authentication. The entire database components such as tables, stored procedures, triggers, can be previewed within the tool panel after removing encryption from the files and the incorporated data. Selective encrypted components from the selected database file can be decrypted and exported to either of the available storage formats. The software allows users to export the encrypted SQL Server database with or without encryption. The tool is supported by all the versions of the application including SQL Server 2014, 2012 2008, 2005 and 2000 and over Windows 8 and all lower versions. The SQL database decryption operation is possible only when the SQL Server is in the live mode; otherwise, the tool will not be able to decrypt the encrypted database files. Demo version of the tool enables viewing the decrypted script for the selected database file within the tool panel; however, this version does not allow exporting the decrypted script to any of the available storage formats. The export procedure can be done with the licensed version of the product which is available in the US $69. Round the clock, support assistance is provided by the technical staff for all kind of product related queries.

Manage accounting and billing tasks for your business.

Open MDB/ACCDB file to get complete preview of database along with table content.