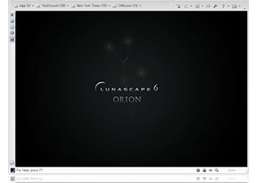 Firefox, Chrome, and Internet Explorer are the three most popular Web browsers, and each has its own strengths and weaknesses. If you find yourself primarily using one browser but occasionally having to switch back to another for a specific purpose, Lunascape might be just the browser for you. Lunascape combines rendering engines from Firefox, Chrome, and IE and makes it easy to switch between them.

Lunascape has a sleek tabbed interface that doesn't exactly resemble any one browser, but it's familiar-looking enough to be intuitive. It comes with three rendering engines: Trident (from Internet Explorer), Gecko (from Firefox), and WebKit (which powers both Google Chrome and Apple's Safari). We were excited to try Lunascape, because there is one Web site that we visit periodically using Chrome that won't render properly; we always end up having to open Firefox to view it. We opened the site in Lunascape using the WebKit engine, and sure enough, we got an error message. But instead of opening a new browser, we just selected Gecko from the menu next to the address bar. The page automatically refreshed and displayed properly. We did have some problems with add-ons; the biggest was that the Gecko engine is from Firefox 3.6.17, while the current release of Firefox is 5.0. This creates some compatibility problems, and given the popularity of Firefox add-ons, it could be a significant drawback for some users. If you have questions about how Lunascape works, there's an online Help file that includes video tutorials. Overall, we think that Lunascape is a great choice for people who'd like to combine their favorite aspects of various browsers or for developers who need to test code across multiple browsers.

Surf the Web with the latest browser from Microsoft.

Explore the Web in a Chromium powered Web browser.

Strike a perfect balance between general use, performance, and technical advancements with mainstream Web browsing.

Keep your bookmarks safely, browse the Web, and enhance the Internet experience on PC.